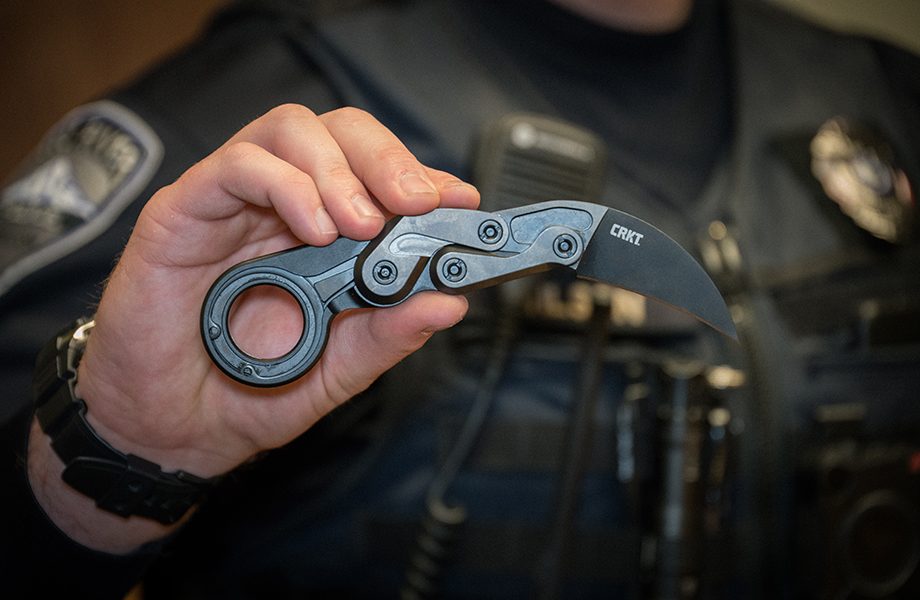 The Provoke™ in the Field with the HRPD

Officer Martin has been carrying an Ed Halligan-designed K.I.S.S.® knife in the pants pocket of his uniform or on his MOLLE gear for over a decade. It shows in the softened edges of the handle, the gentle wear around the pivot point, and the pliability of the pocket clip. “The black oxide finish on the blade, though, doesn’t look like it’s worn a bit,” he says as he holds it out to show us the stark difference between his old reliable and the brand-new Provoke™ he’s been carrying around for a few months.

Some time ago, the R&D team from CRKT packed up 16 new Provoke™ knives and headed out to Hood River, Oregon, an outdoors-centered town 60 miles east of Portland that rests on the banks of the Columbia River. We met with the Hood River Police Department—a 16-officer establishment with a history that spans nearly 125 years—and passed them around.

Now that they’ve had a few months to carry them on the job and after hours, we returned to glean some insights and get some first-hand feedback on how to hone and refine the innovative design to better serve the specific needs of the police force.

“It’s unique—it almost doesn’t look like a knife,” mused Officer Martin. “Oftentimes when I’m carrying anything other than a simple EDC folder in sight on my vest, it can make people nervous. Most people just don’t like the sight of a tactical knife.” He reflects that the Provoke™ is an excellent tool in that regard. “Someone told me they look like a pair of scissors or shears,” said Officer Mike Martin to back up this point. “I like carrying a defense weapon that’s not recognized as such. Even during routine stops and conversations, some people can feel uncomfortable in the presence of my taser, gun, or neck knife. I like that the Provoke™ keeps me prepared while helping people relax.”

“Another thing I like,” offered Officer Gabe Wilson, “the noise it makes when you deploy it is distinct like the racking of a shotgun. I’ve never used another knife like it.”

While the CRKT R&D team was very interested in what the officers would have to say about the look and feel of the knife, we were mostly interested in the feedback they could provide when it came to usability. When Joe Caswell originally drafted the design, it was after hours upon hours of conversations and working sessions with local law enforcement. He set out to create a knife that officers could draw, deploy, and use without needing to free their other hand of their gun.

“You definitely have to train yourself to use it,” said Officer Gabe Wilson. “At first I was trying to ‘flick’ it forward, but it feels great and much more secure when deployed with my thumb.” He’s been carrying it on his MOLLE gear he says, and it’s been very secure when he tucks the tip of the knife into webbing below. Officer Mike Martin agrees, “the length of the knife makes it ideal for quickly clipping it to the outside of my MOLLE gear then tucking into the webbing. And when it’s there,” he explains, “I like how easy it is to quickly grab and deploy. Once I got the hang of it, it became by far the quickest knife I have when it comes to grabbing and deploying.”

For most, the MOLLE gear attachment is ideal, but others have found surprisingly innovative ways to keep it close at hand: “I’m not in the field every day like these guys so I don’t wear a vest,” explains Community Service Officer Marty Morgan, “and I didn’t like wearing it in my pocket. Now, though, I have it on a magnet concealed under the steering wheel in my Jeep Wrangler. There, it’s out of sight and still close at hand.”

In addition to new use and carry ideas, there was also some excellent feedback for the next Kinematic™ knives to come.

For now, learn more about how Joe Caswell created this industry-shifting innovation and get your hands on the first-ever knife to feature it: the Provoke™.