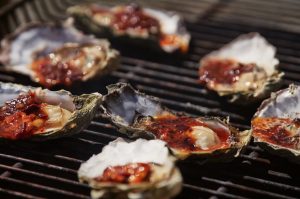 Off the beaten path, nestled between the Olympic National Forest and the sweeping shorelines of Hood Canal we find Set & Drift’s basecamp. Apart from the softly glowing string lights resting peacefully in the canopy of 200 year old trees, the early morning light serves as our trusty guide for our descent to the shoreline below.

Once on the sandy shore, Alice and Van Helker, co-owners of Set & Drift wave us over. If it was an early dawn morning, you wouldn't know it the way the two fjord oyster farmers climb aboard their oyster skiff, wading yards away as they begin strategically unclipping oyster bags. To an outsider the scene might appear like any ordinary day of harvesting, but there’s something special to be said about the blood, sweat, and tears they’ve shed to arrive at this place of routine.

Hard Work Below the Calm Current

Years ago, Alice and Van joined the same uniform service aboard NOAA scientific research vessels, channeling their pursuit for biology and natural science out in the wide open sea. While the immersive experience brought them up close to unparalleled oceanic wonders, it proved equally strenuous, demanding they be stationed separately for long periods of time.

“We knew we wanted to build a life together,” Alice says. “A drive to build something of our own began to creep up, so we started pursuing the idea of oyster farming.”

Drawn to the sustainability of oyster cultivation, Alice and Van began a new leg in their scientific (and personal) journey in 2013 after finally hunting down the perfect tideland along the Toandos peninsula on Hood Canal. This is where Set & Drift shellfish farm would form its legacy. 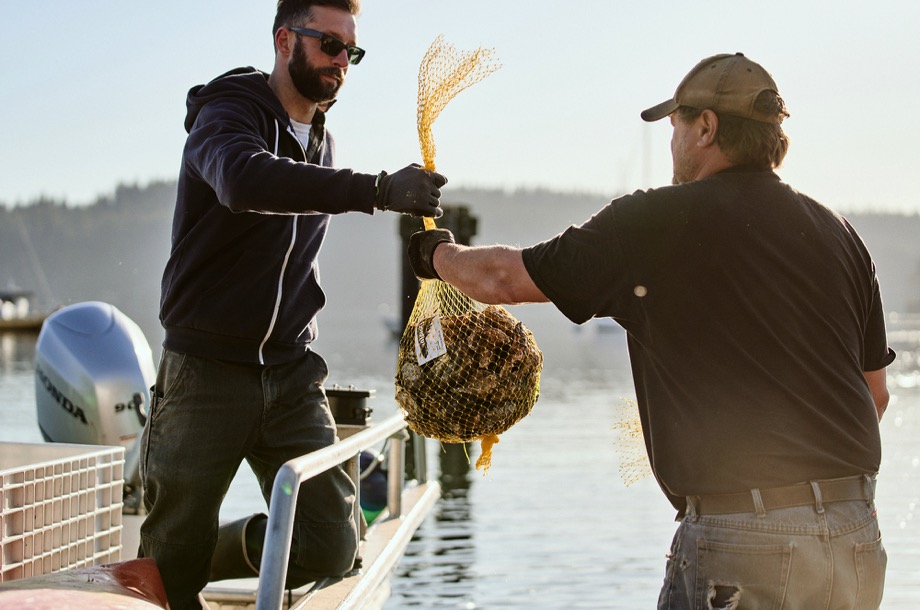 Boots, Gloves, and the Do-It-All Knife

When asked what everyday tools can make or break a day of labor, there’s no hesitation in the response we hear. Boots, gloves, and a knife.

Having the grit, know-how, and discipline to navigate oyster farming’s demanding ways, it makes sense that Alice and Van are selective with the tools they carry. Power and versatility are essential, but so is size—hauling bulky or heavy equipment up and down the steep hillside to the tidelands is simply not an option.

Handing over the Bona Fide™ to the two oyster farmers, it’s not long before we see the knife brandished across rope and netting throughout the day. Made of sturdy 3” blade steel, it’s just the right size for withstanding the hard maintenance of oyster farm life. It’s also a huge plus that the Bona Fide™ features award-winning Field Strip Gen II, which allows for on-the-spot, quick disassembly, requiring no extra tools for maintenance.

As the blade deploys smoothly with the IKBS™ ball bearing pivot system, there’s a collective wave of appreciation for its sheer speed. A powerful tool that moves as fast as the tides—there’s no question the Bona Fide™ was made for this trade.

At the Mercy of the Mother Nature

Alice lugs several bags of oysters over to their boat in preparation for the morning delivery. “When it’s time to harvest, we pull them straight out of the water and load them up the same day. This keeps the oysters fresher and tastier.”

When they’re not making their weekly delivery rounds to surrounding markets, there’s constant maintenance to be done back at the farm. Because in this line of work, only those willing to keep up with Mother Nature’s slew of unpredictable ways will thrive.

“There’s no typical year. There’s always something different going on in nature,” Van says. “It really comes down to perseverance and adaptability in figuring out how to farm your beach. There are a lot of different environmental conditions you can be subjected to, like tides or logs coming through farms during storms.”

As Alice and Van show us the ropes along the shoreline, we notice there’s already a drastic difference in how far the tide has receded. It becomes clear just how much of a race against the clock they constantly face—how every day is an ongoing commitment to the farm’s success.

“It’s a hard thing to explain to people how timing is so important to our work. Where we are, the tidal change can be up to 17 feet,” Alice says as she grabs a heavy duty crate to begin sorting their oyster haul. “And on top of that, they change throughout the year.” 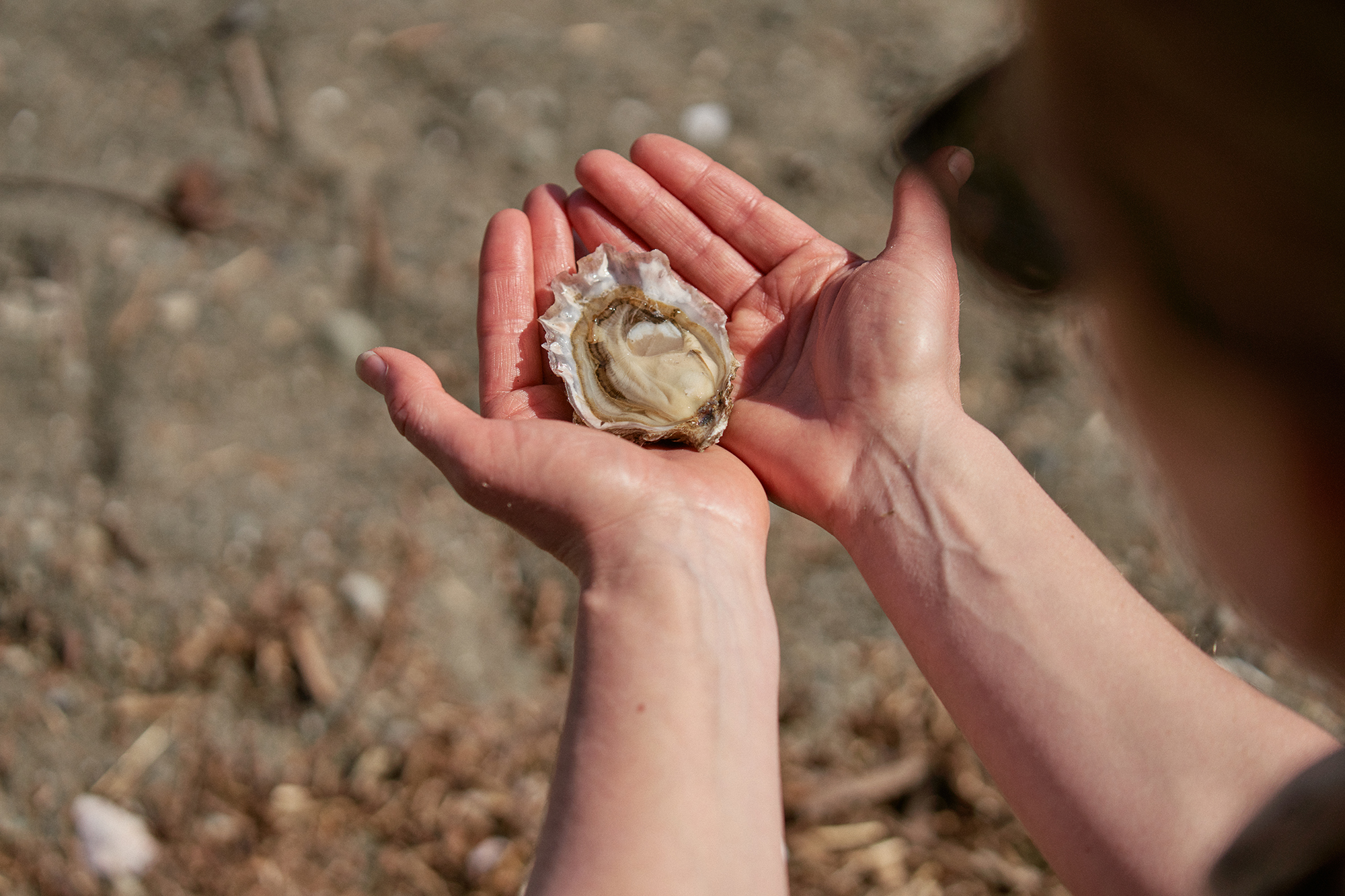 After clearing a couple solid hours of sorting, Alice and Van round up some oysters for everyone to snack on. We prep the surface of a massive beach log to create a makeshift picnic table, as Alice tends to the fire pit a few feet away. Slipping on gloves, Alice lays down a handkerchief with a beautiful Fjordlux oyster in tow.

“How we grow our oysters is we tumble them, which forces them to grow more of a cup shape rather than just long and flat,” Alice says, motioning the knife’s tip around the oyster's silhouette. “There’s the hinge shuck method, which is more appropriate to open the size of the oyster we grow. So you insert your knife at about a forty-five degree angle here at the top, then carefully work it into the hinge to the point where the oyster can hang out on the knife on its own. Then just turn the knife about 90 degrees.”

Alice tosses it on the grill, then shucks more for us to consume raw. This time she uses the knife to neatly slice off the oyster off the bottom shell, making it easy to slurp straight from the shell. One by one we relish in the crisp salty goodness of the Fjordlux oysters, marveling at its intricate journey from the water to our tastebuds. 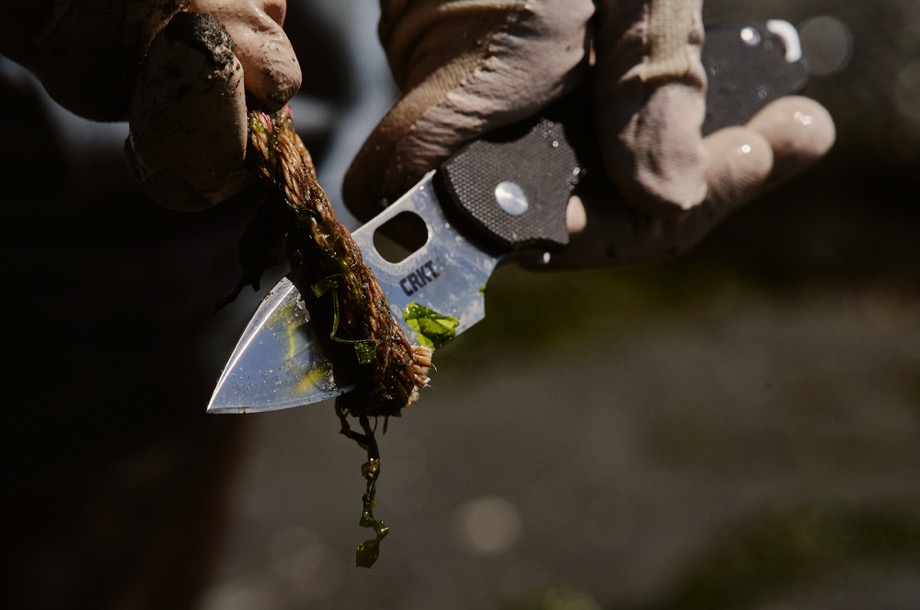 The Give and Take

Taking in everything the two oyster farmers have endured to build their business, there’s immeasurable respect for Alice and Van’s everyday commitment. Not only in their cultivation of appetizing oysters, but in their strides toward sustainability.

“Oysters are filter feeders, which means that they eat the phytoplankton that passes by,” Alice says. “Without filter feeders, algae blooms spike and use up all the oxygen in the area, which then leads to areas where nothing can live. Essentially, oysters keep nutrients in the waters balanced. Among other things, farming oysters brings this ecosystem service back, while not reducing wild populations.”

As the day winds down, Alice and Van’s three-year-old son Wayne joins us on the beach. Fearlessly exploring the sandy terrain, it’s clear just how much this environment has made an imprint on his adventurous spirit. There's a dawning realization how everything Alice and Van has thus poured into Set & Drift is finally moving full circle--how this special place offers a priceless return to the two farmers who continue to tenderly care for it.

“Day after day, just being around natural processes that are so much older and bigger puts much of life into perspective,” Alice says. “Life can be hectic. At times full of worry. But the natural world on the macro scale just isn’t in comparison. Things happen slowly on this immense scale. And that’s calming to be around.”