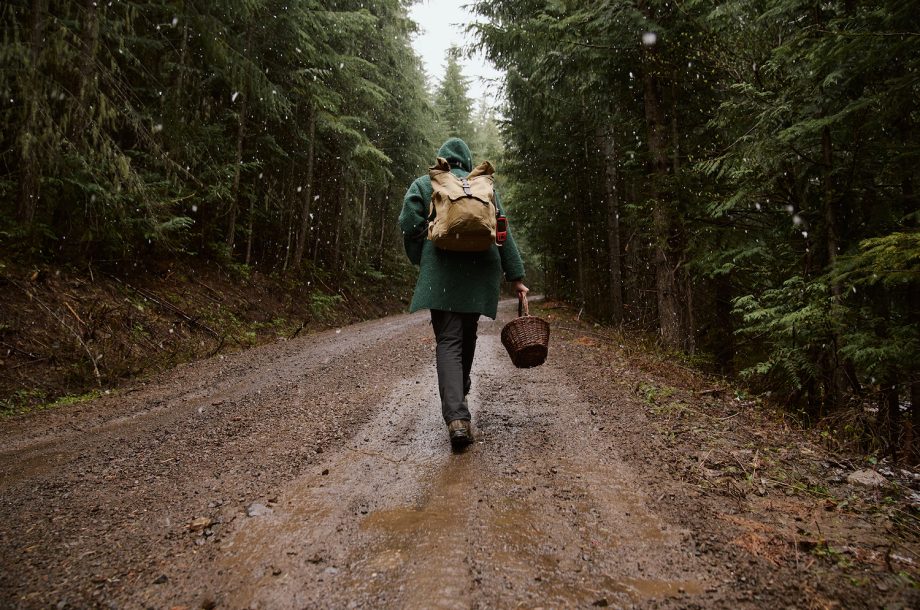 Mushroom Hunting with Yellow Elanor and the Biwa™

Climbing closer to our secret destination in Washington’s Gifford Pinchot National Forest, the sun struggles to break through the thick layer of stormy gray clouds looming above us. We weave through the canopy of towering ponderosa pines, gravel crunching beneath our tires as we pull off to an inconspicuously unmarked area on the side of the road. Ahead of us, seasoned mushroom hunter, Rachel Zoller—otherwise known as Yellow Elanor—steps out of her Subaru Forester, greeting us with a bright and knowing smile. It’s the look of someone who just can’t wait to reveal a thrilling, well-kept secret.

To the unknowing or untrained eye, this would appear like any ordinary place off the beaten path. But as Rachel pops the trunk of her car and strategically assembles her supplies for the hunt, we realize we’re in for a special treat: this remarkable place is one of Yellow Elanor’s well-researched hidden gems where she guides other foragers in search for Pacific Northwest hidden treasure. That is, nature’s treasure known as mushrooms. 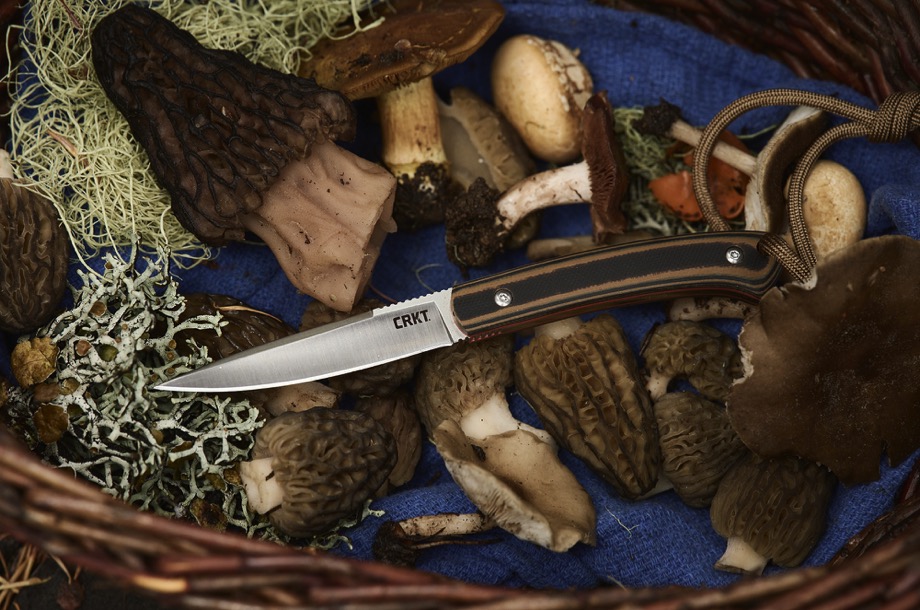 Before adopting the moniker Yellow Elanor, Rachel admits not paying too much attention to mushrooms. But what propelled her to uncover this vast new world of fungi species would seem to be happenstance—and perhaps a call from fate. It began when Rachel joined a group of friends on a typical fall hike; while the group’s original mission was simply to search for huckleberries, it soon shifted to something else entirely. As Rachel and her companions traveled further into the forest, she recalls someone in the group pointing out sproutings of chanterelles along the forest floor.

“It just was such a surprise. Up until this moment, I had spent a lot of time in the woods, but never really paid a whole lot of attention to mushrooms before,” says Rachel. “It felt like this unveiling of the forest floor. There were different shapes, sizes, colors of all kinds. So I began asking a lot of questions, but the group I was with was most familiar with the Chanterelle and not the rest of the biodiversity. It was this initial experience alone that was enough for me to want to go out again. I knew I wanted to learn more about this world.”

Inspired to broaden her knowledge, Rachel dove in head first, taking her learning into her own hands by adventuring outdoors. On her solo trips, Rachel equipped herself with a camera to document all of her findings so she could conduct more research post-excursion. The door to new discoveries had been opened—and Rachel didn’t waste any time stepping through it. 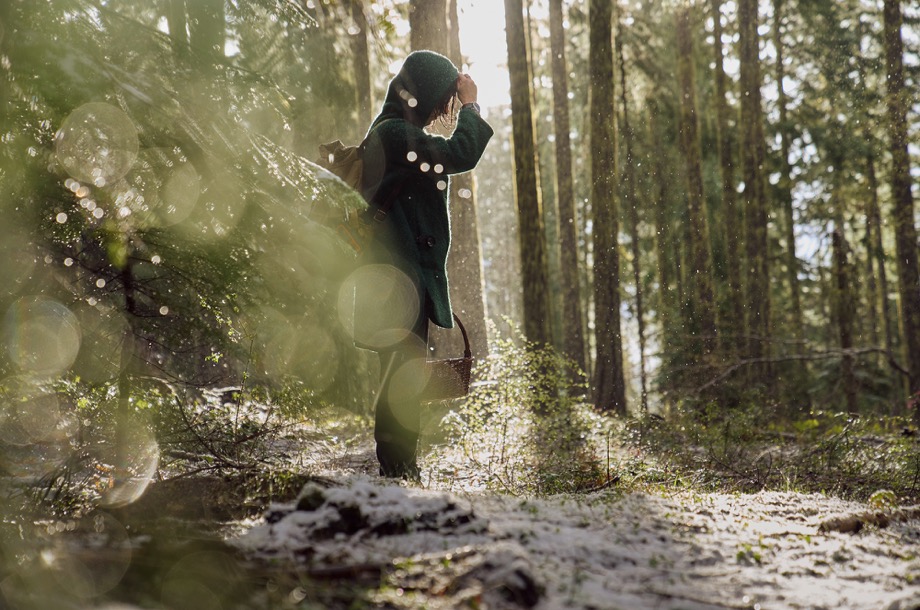 The weather takes a chilly turn with flurries cascading from the sky. We march onward, veering off the road and stepping deeper into the forest as Rachel leads us along the hillside. Traversing up an incline, there’s a small clearing below the shadowy forest canopy. Suddenly, Rachel halts us in our tracks as a faint light beam breaks through for just a moment. Excitedly letting out a cheerful cry, our eyes dart over to the area of forest floor she’s pointing at. And much like a needle in a haystack, we spot several morels poking out ever so shyly from the dark, damp soil.

As Rachel carefully kneels in front of our new discovery, she unsheeths the featherweight Biwa™ and angles the high carbon stainless steel blade against the stem of the mushroom. In one clean, effortless swoop, it glides straight through the base of the spongy specimen. Rachel grasps the newly freed morel in her palm, using the tip of the sturdy Biwa™ to trim off any lingering excess dirt.

Morels being one of the premier delicacies most commonly found in the Cascade Mountains, Rachel breaks down how the Pacific Northwest offers a slew of conditions that make mushroom hunting so uniquely phenomenal here.

“The Pacific is such a mecca for mushrooms. There's a lot of rain here and you don't have to travel far to experience the diversity of our bioregions,” says Rachel. “In the foraging aspect, there are species that love to be right on the coast, right where the sand and trees meet. Then if you travel into the valley, or the Cascades from the east versus the west side, you’re going to have a wildly different experience. Whether you’re harvesting herbs or mushrooms, there’s a wide range of options in such a compact area, from high desert, all the way to the ocean, to the rainforest. It's just incredible.” 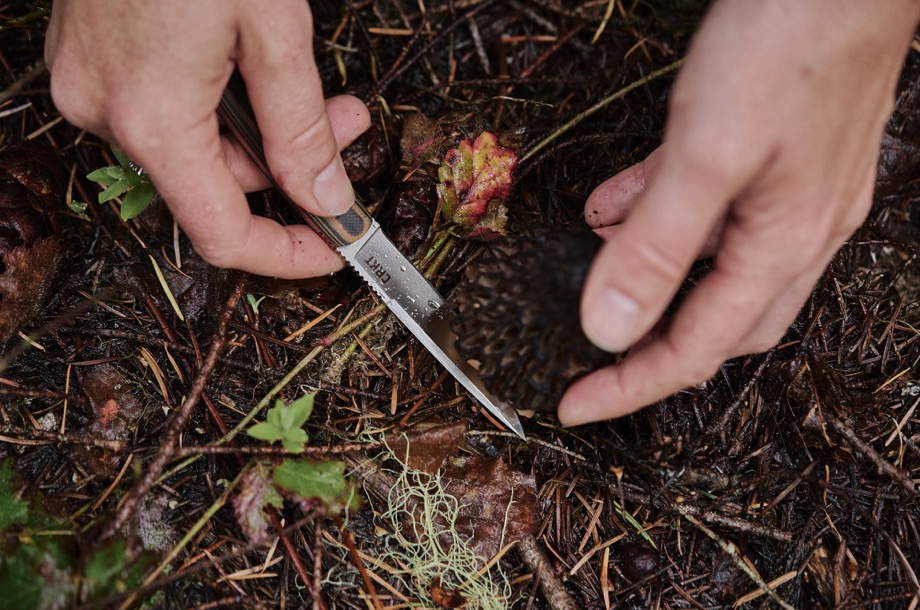 Rachel at the helm, we trek further along the unmarked forest path. In a way, mushroom foraging is a lot like hide and seek, a game which requires a great deal of patience and acute sense of awareness so that no important clue is overlooked along the way.

“Identifying a mushroom is super important because if you're going to consume something, you need to know what it is,” says Rachel. “If you're going to be good at understanding how and when to find them, it takes an incredible amount of observation skills and patience. It’s about putting all the puzzle pieces together, paying attention to what you’re observing like what flowers or trees you see, along with everything else going on in the environment.”

This kind of meticulous attention to detail and general detective work isn’t something Rachel takes lightly. Today, as an educator and professional guide, Rachel spends a great deal of time poring over where to take her classes of new foragers. Many of the spots she locates are only uncovered after hours of preparation and research. But no matter the hard work and dedication she pours into her craft, it always pays off in the end.

“I love taking people out into the forest, when a person all of a sudden sees a tiny baby mushroom growing out of a pine cone for the first time, there’s almost this overwhelming sensory overload and amazement,” says Rachel. “My favorite thing about being an educator and being out in the woods is having people’s eyes open to the forest floor in a totally new way.” 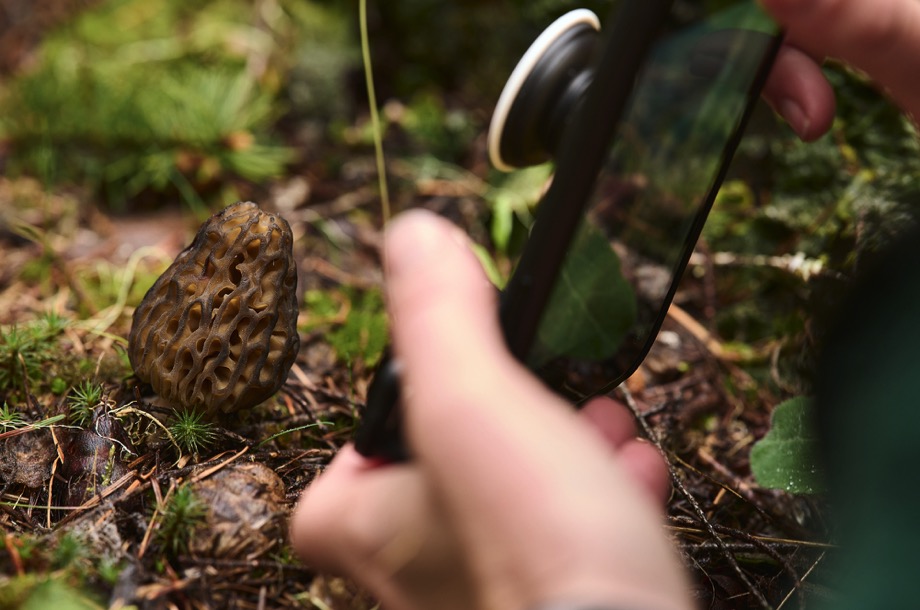 As Rachel adds several new additions to her now abundantly diverse wicker basket, we notice she never leaves behind a trace post-forage, the excess clippings all added to her basket to discard later. Even when she pulls out her macro lens to document the mycelium, there’s a thoughtfulness in the way she interacts within the environment. Her passionate curiosity lives side-by-side with a respectfulness for this world she navigates.

“Foraging has definitely become more popular in the past few years, the challenge is making sure everything is being done in an ethical and sustainable way,” says Rachel. “Mushrooms are pretty hearty when it comes to harvesting, but there are some practices that can be really damaging.”

As certain land management practices such as logging or disturbing mycelium by repeatedly visiting a single spot, Rachel notes there’s a responsibility bestowed to all who partake in mushroom foraging—whether it be their first or hundredth time. In her role as an educator, Rachel expresses the fine balance of providing enough information without promoting irresponsible practices.

“My goal isn’t to be a gatekeeper. I want to provide enough education for people to feel confident in knowing how to forage,” says Rachel. “Everybody's welcome back, but there’s also an element to be mindful in giving the land a break, to leave mushrooms for the animals, and not over ravage a place. It’s possible to harvest in an ethical and sustainable way. And that’s something I always hope to pass along”.