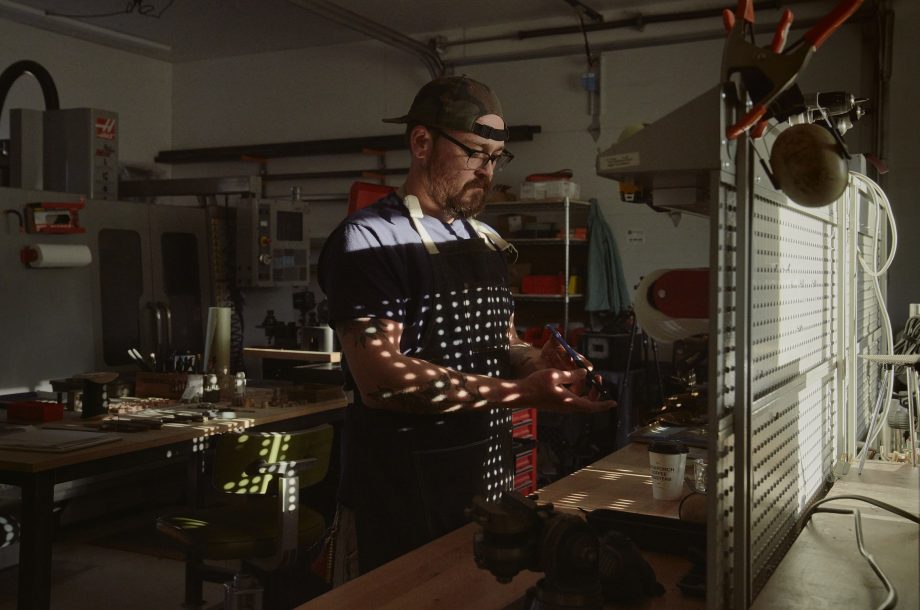 The words “Put in the Hours” are posted on the wall of Lucas Burnley’s workshop. A seemingly simple phrase, the message is the invisible force that has propelled every experience

in Lucas’ life forward—from how he first gained his footing at a young age in the world of knifemaking, to his life-changing relocations within the last 5 years—moving from Albuquerque, New Mexico, to Cape Cod, Massachusetts, and finally settling in Bend, Oregon. Every moment of Lucas’ story points to a reminder that if you’re passionate about something, you’ll never regret the work required to make it all happen.

Before his family settled in Albuquerque at the age of 12, Lucas grew up in a bus—a converted bookmobile from the ‘70’s to be exact. Even then, the one object Lucas consistently carried was a knife. Indeed, his father remembers that Lucas’ earliest career ambitions were to be a knifemaker. In the midst of their cross-country travel, his family often made pit stops at bustling flea markets to sell serapes (blanket-like textiles) they had picked up in Mexico or items they had made. These sales allowed them to continue their life on the road and were pivotal in Lucas’ knifemaking journey. From the tables of imported samurai swords to vintage knives of every style, he began to hone his eye for design and quality—separating the wheat from the chaff. “I probably didn’t realize at the time but I was formulating the concepts that would ultimately lead to where I am today.”

By the age of 16, Lucas’ curiosity to learn to build bicycles led him to leave home and enroll in a Government welding program, serving as his first foray into structured metal work. Soon thereafter, Lucas began working at a small machine shop that specialized in making titanium body jewelry. Immersed in this environment of newfound possibilities, Lucas learned some of the high-level manufacturing processes and finishing techniques that he would later use in knifemaking.

“I made my first knife when I was around 17 years old,” says Lucas. “I was still in welding school at the time, but when I graduated from the Job Corps, they gave me a readjustment fund. It was probably intended that I would buy some clothes or boots for work, but I took all of that money and put it toward buying a Bader 2x72 knife grinder. I still have that exact grinder, and I use it every day. It’s definitely an old friend.” 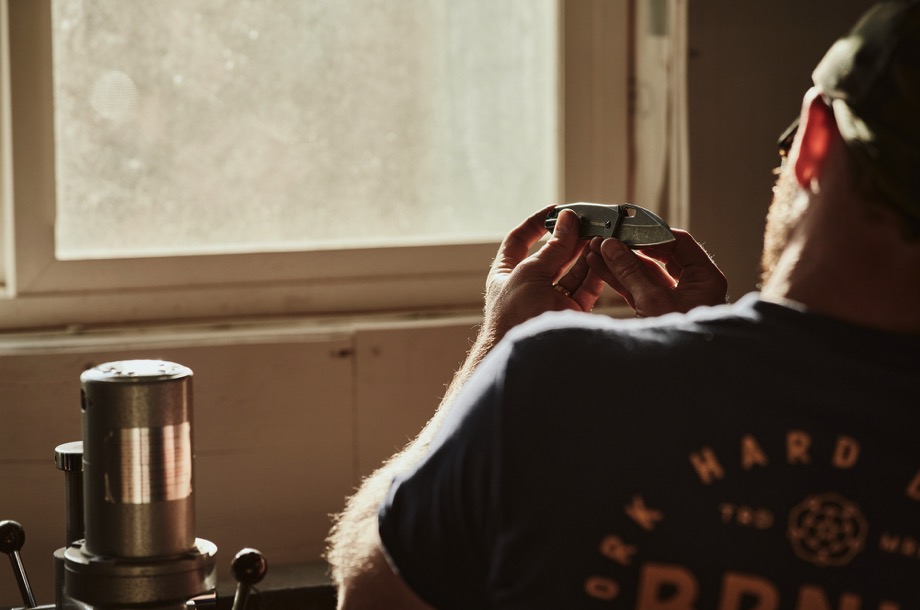 Back at Lucas’ workshop, he gives us the tour of all the equipment—from hi-tech to hand tools—that he uses to bring his ideas to life. For the majority of the past 20 years, the workshop, in the general sense, has been Lucas’ home, and it has a personal charm that comes through when you walk through the door. Pictures of family and personal memorabilia are proudly displayed on the walls, offering a peek into Lucas’ journey from self-taught starter to established designer and maker. Above all, the unique touches are a reminder just how Lucas’ creations are not tools devoid of origin, but rather as extensions of this maker’s identity.

Sitting in the middle of the room is a workbench with some of Lucas’ sketches laid out. As he shows us different prototypes, he begins sharing his perspective on the value of doing things by hand—the importance of approaching learning the “analog way”.

“When I started making knives, learning new techniques and processes wasn’t as easy as it is today. You really had to put in the work to seek that information out. My library started to get bigger and bigger. I taught myself how to cord-wrap a knife (Obake) by practicing for hours after seeing an example in a museum. And if you saw a technique you liked that another maker was using, you’d think ‘I'm going to write this guy a letter and ask if he’ll tell me how to do it’. With regard to the latter, this type of information sharing was honest. And in that, there's also this sense of lineage.” 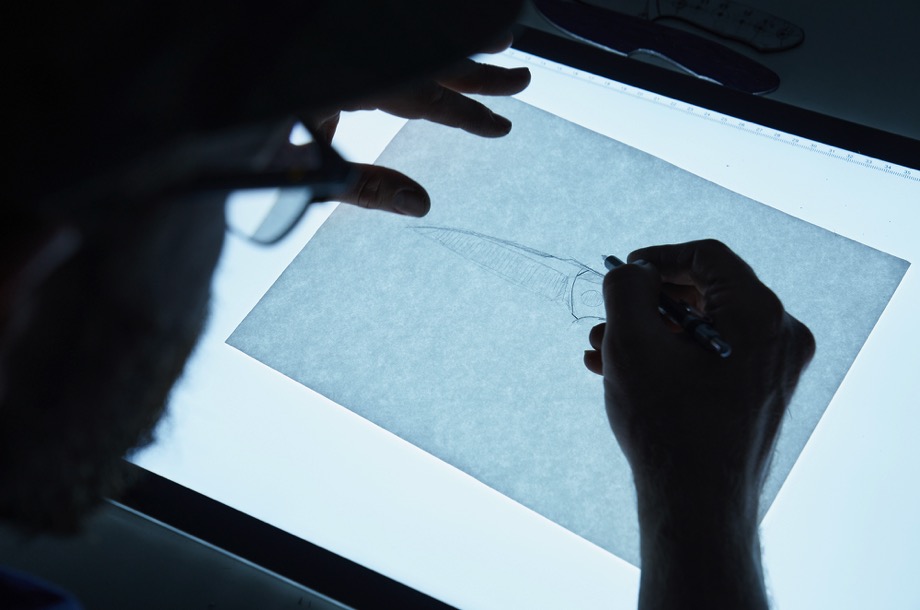 Lucas recalls actively seeking out the guidance from custom knifemaker and American Bladesmith Society Mastersmith, Joe Cordova. One-to-one time spent with Cordova and other seasoned knifemakers influenced Lucas’ conscious decision to honor the history behind his craft. This way of paying tribute to his predecessors reveals just how much Lucas’ creations are pieces of a larger picture.

“When you just look at social media, you don't know the history. You don’t know the stories,” says Lucas. “I've always realized the benefit that technology and social media provides, but it's also important to know ‘the why.’ I’m interested in the history behind designs and I try to figure out where techniques come from. As our industry progresses, being able to give people their due is really important. In a similar way I value analog learning but I embrace technological advancements. Both are valuable tools in a maker’s repertoire.”

As Lucas turns over the newly released Squid™ model in his hands, we can see why it’s a classic. As an easy-to-carry, compact design, it gleams with strength and durability. Lucas notes that this latest Squid™ is equipped with an Assisted Opening mechanism that revolutionized the industry, created by Knifemaker’s Hall of Fame Member, Ken Onion.

“The Squid™ has been pivotal for me not only in the custom industry, but with CRKT® as well. My goal isn’t to be super-prolific, but I do strive for my designs to be iconic. The Squid™ inside of CRKT® is the closest I’ve come to reaching that.” 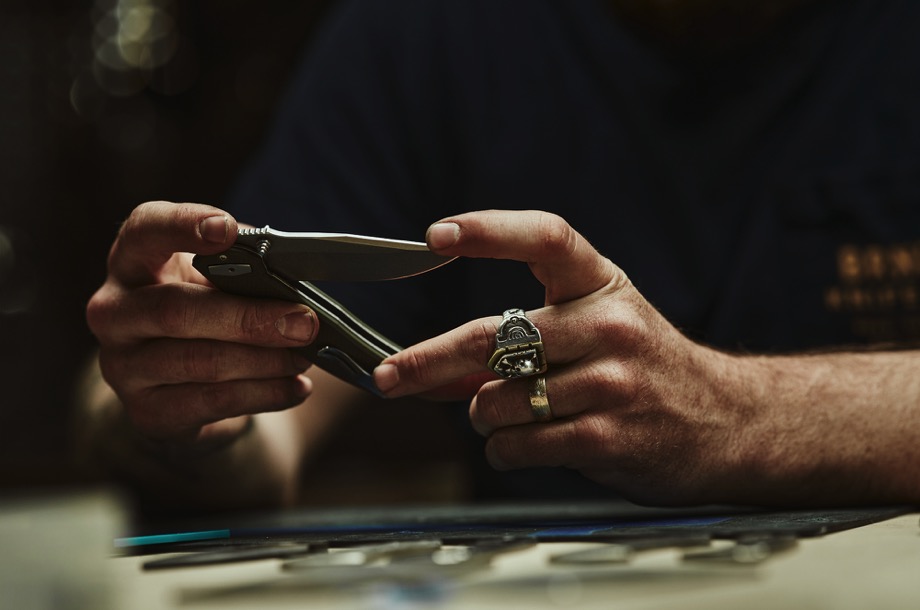 While uncovering tried-and-true knifemaking techniques is part of Lucas’ learning process, he finds inspiration all around.

Lucas refers to himself as a tourist in many areas of life, constantly dipping his toes into new water and dabbling in everything from learning how to surf Bend’s Whitewater River, to track days on a motorcycle, to a brief stint in knitting. He jokes that while he’s not an expert at any one thing, he enjoys the process of discovery. “A few years ago I took a personality test out of sheer curiosity, and figured out that I’m a ‘learner.’ I love learning as much as I can about a broad range of subjects.”

This eclectic approach to life extends to knifemaking where he’s been able to push himself and achieve success even in the failures.

“Even though I’ve been making knives for close to 20 years now I still lean into the failures,” says Lucas. “The more you learn, the higher your standards become, the more you fail. I view this as growth through failure. Creating knives was the first thing I did that for me, didn’t have a ceiling. There’s always another technique, skill, or genre to explore. I haven’t been able to get bored, and that’s a gift.”

Lucas’ bookshelves brim with all kinds of topics ranging from farming to furniture and fashion. As we scan the collection, like with any designer or creative maker, we naturally become curious if there’s a specific place from where he draws his inspiration.

“I’ve always tried to pull just from my life and other interests,” says Lucas. “A lot of the things that most directly affect my work aren’t related to knives. I like to surround myself with things that inspire me. I have a pretty extensive library that has nothing to do with knives at all, but a lot of it is based around some type of creative process or someone’s life work. Right now I’m really interested in ‘color’ and its effect on design so I’m having fun reading Pantone: The Twentieth Century in Color. It really runs the gamut.”

Filling his world with interesting stories and pastimes, Lucas notes there’s value in pivoting your

focus to something beyond what’s directly in front of you. Lucas’ company, BRNLY Brand, was born out of his varied interests and became a place where he could explore non-knife projects and fuel his passion for design, collaboration, and community. 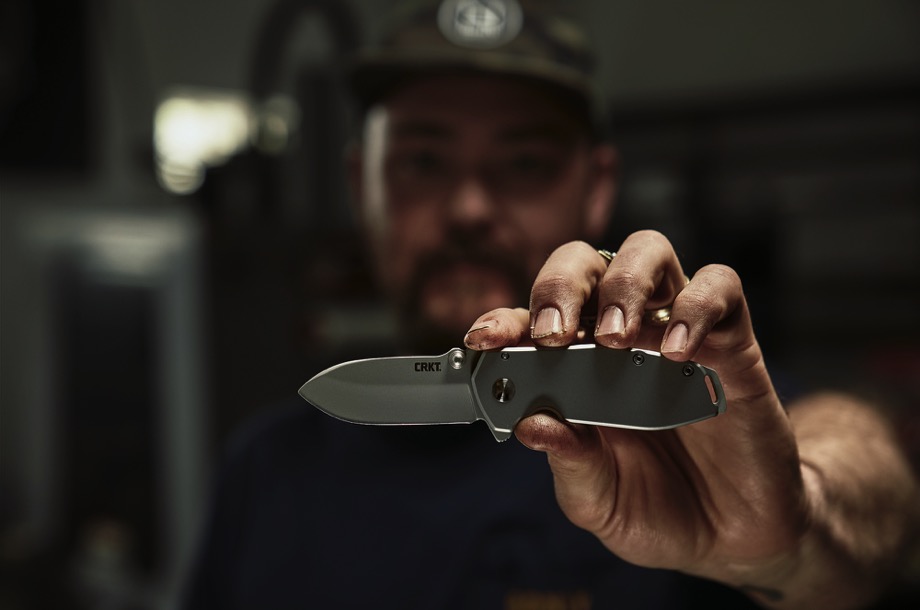 In 2013, Lucas launched what would later become BRNLY Brand with his flagship product, the BRNLY Cypop. Part bottle opener, part pocket charm, and part challenge coin, the idea behind Lucas’ Cypop was to include people in the brand beyond the world of custom knives. And sure enough, people wanted in, causing Cypops to skyrocket in popularity and demand that grew a large and tight-knit community of collectors.

Lucas is quick to acknowledge how much he values his customers and supporters that allow him to do what he loves. With the Cypop’s growing popularity, he saw an opportunity to use his platform as a means of giving back to an organization that helped him and his family as a child—Marine Toys for Tots.

Every year since 2013, Lucas produces a special line of holiday Cypops which he then raffles off over a 24-hour period. 100% of the raffle proceeds go directly toward the purchase of high-quality toys, which are then donated to local Toys for Tots organizations. This grassroots event called “Cypop 4 Tots” exemplifies the community and the Brand’s Work Hard. Do Good. credo that they embody.

Lucas’ continual gesture of good has had a successful run of 8 years, during which time, his community of supporters have raised over $430,000. 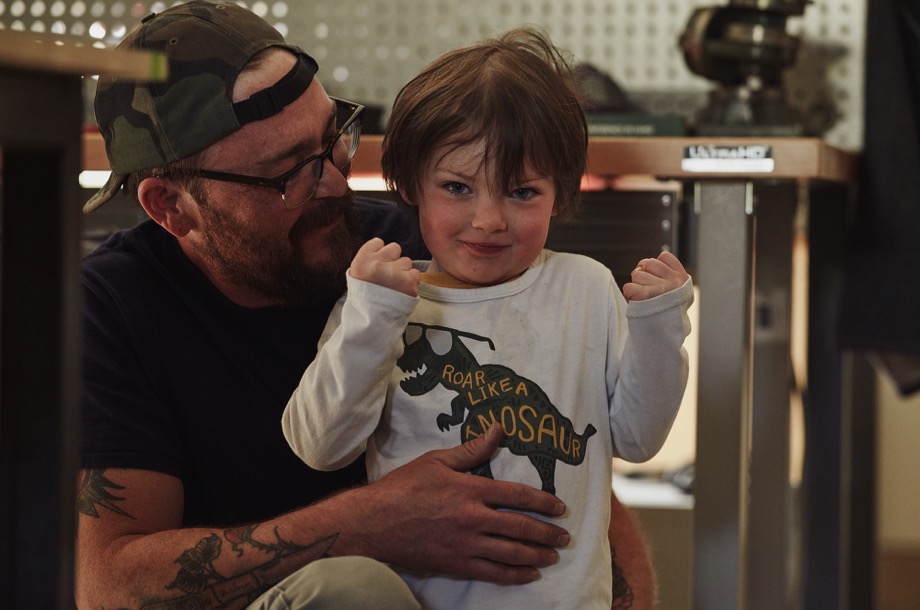 While his workshop is where you’ll find Lucas putting in the long hours, it’s also the place that

holds the reminders behind why Lucas continues doing what he does. As his wife and business partner, Maddie, pops in to shoot product photography upstairs, he introduces us to his family. In the same way personal photographs of Lucas’ journey are entwined throughout his shop, we see just how important it is for him to be a great husband and father, in the same way he is a great knifemaker.

“At this point when I think about dreams and goals for the future, I’m in an interesting period of my life,” says Lucas. “I’ve had the benefit of focusing solely on my work for the last two decades, which is a bit surreal as I’ll be turning 40 this year. Now, I’m trying to think about how I can be more present for my family, and how I can give my kids a really good childhood that’s memorable for them. There’s an obsessive quality to this type of work that I’ve had to learn to balance for the benefit of the people I love.”

While balancing family life and work has inevitably evolved since the start of his journey, the constant that remains across Lucas’ personal and professional life is his fierce and undying dedication. From falling in love with the craft many years ago, to building a successful career as a professional knifemaker and designer, Lucas Burnley isn’t afraid to work hard—because every hour he puts in goes toward creating something truly remarkable.